TM is a real-time, non-relocating, conservative, allocator using type- and color-segregated lists, based on Henry Baker’s “Treadmill” allocator. The source code for TM is located at https://github.com/kstephens/tredmill.

TM interleaves marking, scanning and sweeping during each mutator’s call to tm_alloc().

TM attempts to limit the amount of work in the collector to avoid stopping the world for long periods of time. It does not require a separate thread for the collector as all collection activities are interleaved with allocation.

Full documentation is located at: http://kurtstephens.com/pub/tredmill/current/doc/html/index.html

An allocation unit is a tm_node. Each tm_node is allocated from a block of system memory (tm_block) sized and aligned to a multiple of the operating system’s page size. Each tm_block is dedicated to a particular type (tm_type). Each tm_type represents a tm_node allocation size, thus each tm_block is uniformly parceled into tm_nodes of the same size. In general, each power-of-two size has a tm_type. However, tm_types can be created for any size.

Each tm_node has a “color” tag describing its current allocation state:

Each tm_type has it’s own tm_WHITE, tm_ECRU, tm_GREY, and tm_BLACK doubly-linked lists. Each tm_node is a member of one, and only one, of its type’s color lists. To keep the tm_node header small, the node’s color is encoded in the lower two bits of the tm_node._prev pointer.

When a tm_node’s color changes, it is moved to a different colored list in its tm_type for processing in a different allocation phase.

Node types can be explicitly created for common sizes that are not a power of two, to reduce memory fragmentation.

The allocator interleaves the following phases with allocation:

During each call to tm_alloc(), each phase will do some collection work before returning a newly allocated tm_node:

As nodes are allocated, marked, scanned, sweeped and unmarked they are moved between the colored lists as follows: 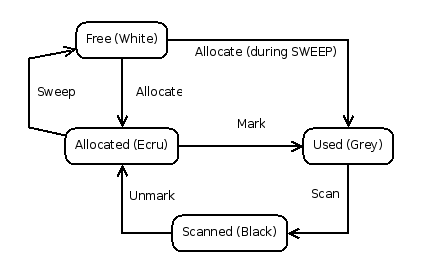 A limited number of new free nodes are parceled from the type’s current allocation block as needed and are initialized as new tm_WHITE nodes.

The tm_SWEEP phase will always attempt to scan any tm_GREY nodes before continuing to sweep any tm_ECRU nodes.

The tm_BLACK color might seem a better choice for tm_SWEEP allocations, but this would force young nodes, which are more likely to be garbage, to be kept until the next tm_SWEEP phase. Coloring tm_SWEEP allocations tm_BLACK would also prevent any new interior pointers stored in nodes that may reference tm_ECRU nodes from being scanned before tm_SWEEP is complete.

To prevent thrashing the operating system with tm_block allocation and free requests, a limited number of unused blocks are kept on a global free list.

Aligned blocks allow determining if generic word is a pointer to heap-allocated tm_node to be computed with simple pointer arithmetic and a bit vector check.

To determine a pointer’s allocation:

Nodes are segregated by type. Each type has a size. By default, type sizes are rounded up to the next power of two. A specific allocation type can be requested with tm_adesc_for_size(). The allocation descriptor can then be used by tm_alloc_desc(). The opaque element can be used to store additional mutator data.

Each node type has its own colored lists, allocated block lists and accounting. Segregating node types allows allocation requests to be done without scanning tm_WHITE nodes for best fit. However, since types and the blocks are segregated, and nodes of a larger size are not scavenged for smaller sise, this could least to poor actual memory utilization in mutators with small numbers of allocations for many sizes, since a single node allocation for a given size will cause at least one block to requested from the operating system.

The color lists are logically combined from all type for iteration using nested type and node iterators.

During the tm_SCAN and tm_SWEEP phase, any tm_BLACK node that is mutated must be rescanned due to the possible introduction of new references from the tm_BLACK node to tm_ECRU nodes. This is achieved by calling tm_write_barrier(&R) in the mutator after modifying R’s contents.

There are two versions of the write barrier:

Stack writes are not barriered, because stack scanning occurs atomically at the end of tm_ROOT.

A virtual memory write-barrier based on mprotect() might be easier to manage than requiring the mutator to call the write barrier. Recoloring and marking root set pages can be done in hardware assuming the overhead of mprotect() and the SIGSEGV signal handler is low when changing phases and colors.